St. Mary’s stands on the perimeter of the Parish. The land was given unconditionally by Edward Carlyon the owner of Tregrehan House at that time, in a conveyance dated 9th July 1847. This was the area, 240 feet from east to west and 170 feet from north to south, locally known as Biscovean.  The land included a quarry adjoining the same on the south, (which we believe to have been situated where St. Mary’s Car Park now stands) and a wood or plantation adjoining the eastern side of the quarry.﻿﻿

There is a gate on the west side of the churchyard where the servants from Tregrehan House entered the churchyard after walking across the fields to attend church services and is still there today, albeit a little dilapidated.﻿

The church was commissioned in 1846 by the first Vicar of Par﻿, the Reverend George Rundle Prynne.  Prynne was also a pioneer of the Anglo-Catholic Movement and later became famous as Vicar of St. Peters Plymouth.﻿

St. Mary’s was built mainly from the reddish coloured Biscovey slate,   taken  from the adjacent quarry, the architect preferring to use local materials where appropriate,   The general effect of the exterior created by Street, is picturesque and a revival of the medieval.   ﻿

The quoins, or corner stones, are hewn from Pentewan stone brought from the cliffs near Mevagissey, a stone that was used locally in the 13th and 14th centuries and described by Nikolaus Pevsner “ as mellow and loveable even today”. Pevsner, in The Buildings of England, also describes the church as “a remarkable work for a beginner, of a freshness and charm not always aimed at or achieved by Street”.﻿

The most impressive aspect of the church is the square tower with broached octagonal belfry (containing one bell) and stone spire,  standing at the west end of the south aisle.   Looking almost primitive in its vigour, St. Mary’s tower is a brilliant adaptation of basic forms observed in the two Cornish medieval steeples at Cubert and Lostwithiel.﻿﻿  The plan of the church comprises a chancel, nave and three bay south aisle, each having a separate gabled roof.  Early descriptions of the church suggest the original seating to be 360.  ﻿The porch was an addition some time after 1886 and would seem to have been merely a separated area using wood screens much the same as it is today and could have originally been a seated area.  ﻿

Regrettably, the stone used in the construction of the tower was so porous that the tower has constantly leaked during long periods of rain and water ran down the interior surfaces of the tower.  The situation has been a constant concern since construction in 1849 and has reached critical proportions in 2017 when the parish was advised that major renovation work was needed to ensure the continued stability and safety of the tower.  It was assessed that the remedial work could take up to 6 years at an estimated cost of £350,000.  A grant of £198,600 was obtained from the Heritage Lottery Fund.

A £100,000 fund raising drive was initiated in 2018, which met its target in July 2020 The remaining balance being donated by three local business’s and personal donations.

The extensive repairs to the tower & spire and to the external walls of the church building were signed off in January 2020, with the total building works completed in June.

We now in the process of raising £25,000 to re-plaster the internal walls.  This arose as the original scope of the project for internal wall repairs, only covered the section around the tower.
On reviewing the state of the remaining church walls the project team and Church Council approved repairs to all remaining walls that showed signs of  damp and flaking plaster.
All internal walls are now in their original and natural state, and are well worth viewing once restrictions are lifted.
It will be a couple of years before the stonework dries our completely,  but we are confident that we have the support of the community to raise the sum required.
The church is no longer on Historic England's 'At Risk Register'. 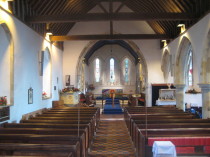 The south aisle was converted into a side-chapel and dedicated to St. Francis and the stained glass windows over the altar there are in memory of Frank Garrett, who was Vicar of Par from 1872 to 1885.  There are 11 stained glass windows in the Sanctuary and Chancel, which were put in when the church was built, and are by William Wailes (1809 – 1881).    The windows of the nave are plain double lancets, and at the south east corner a fine effect is obtained by their three differing lengths.   The centre window above the War Memorial is a dedicated to St. George.﻿﻿ 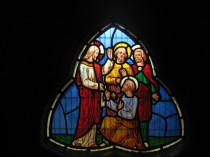 A delightful surprise for those who go up far enough to see it, is a tiny triangular window under one of the sedilia arches. The editor of Ecclesiologist (1849 Vol. VI p.394) described the positioning of this window by Street as “put there for no earthly purpose that we can conceive but to give a quaint originality to the external effect, and a certain draught to the deacon who would occupy that seat”﻿﻿﻿

The floor is paved with Staffordshire tiles in black and red throughout.

Also, it is known that pews were removed from the back of the church, where the organ now stands, the previous organ being situated in front of and to the right of the choir stalls. This could account for the loss of the seating capacity, the present day seating being approximately 200.﻿

According to records the Chancel was renovated in 1899 and early photographs suggest the altar was detached from the wall and the area behind the altar was screened and there were decorative arches to the left and right under the windows.﻿

The original Street altar is fashioned in the same material and style as the font and the pulpit.﻿﻿﻿  The altar, font and pulpit are of Caen stone.  The altar is 6 feet long and 7  inches thick, suppoprted on 3 blocks of the same ston, 2 feet 6 inches square and 6 inches thick.  The whole chamfered at the edges.

In 2000 this Altar was relocated into the St Francis Chapel where it is displayed in its original condition.  It was replaced with a larger wooden altar, on a newly raised area of the Chancel, which was moved out from the east wall of the Chancel.﻿

In 2011 a refreshment area was incorporated into this chapel, fronted with the wood from the former pews.

In the Churchyard to the south of the Chancel door, stands the Biscovey Stone, an early Christian memorial stone.  It is the shaft of a cross which formerly stood on the south side of the St. Austell to St. Blazey Road on the corner past Biscovey Post Office.  It was moved to its present location in 1896 by the Rev. D. R. Vaughan.﻿

The Biscovey Cross, situated 6 metres from the south wall of the Church appears to be a late example of a medieval wayside Cross.  There is no record of its original location.  Like the Biscovey Stone this is a listed Grade II monument.﻿  The cross was given by Mr Giles, the builder of St Mary's, on completion of the building.  "It forms a conspicuous object near the principal entrance of the church" (Royal Cornwall Gazette 7 November 1849).

St. Mary’s is a church built with a vision of the celebration of the Eucharist in all its majestic holiness, and in all its joyful homeliness.  The large chancel (half the length of the nave), the spacious sanctuary, the sedilia, the three tall widely-spaced lancet windows, crowned with their lovely arcade, all make a perfect setting for the High Altar.

The Church is Grade 2* listed.

The parish has a list of people buried in the churchyard who have headstones, thanks to the Cornwall Family History Society, unfortunately we do not have a record of any of the unnamed graves.

The parish also has some information on the families of several of the people with headstones, thanks to the research of Mr Nigel Cheshire. If you would like to know more please contact the Web Master.